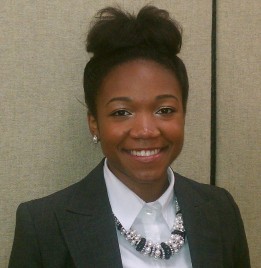 Adelphi, Md. (Nov. 17, 2011) -- Way2GoMaryland, the University System of Maryland's (USM) campaign to encourage students and their families to begin preparing for college early, is pleased to welcome Linnita Hosten as the campaign's outreach coordinator.

In this new position, Hosten is available to conduct presentations about Way2GoMaryland to groups throughout Maryland. The campaign embraces the opportunity to connect with school systems statewide, church groups, youth clubs, and other civic organizations.

Hosten is a May 2011 graduate of Towson University, from which she earned a B.S. in mass communication. On an extracurricular level, her college experience included extensive work in mentoring young people. At Towson, Hosten served as a resident assistant, peer educator, student activities group coordinator, and freshman orientation team leader.

"So many of my mentors have given me a great foundation as I began seeking out my own college experience, and many of them supported me throughout the process," Hosten said. "Therefore, I'm excited to serve as the outreach coordinator for Way2Go Maryland and share some of the information my mentors gave me. I have always been an avid advocate for youth."

During the academic year, September through May, the campaign holds two major events on a Saturday in Maryland. The final Way2GoMaryland event for 2011-2012 is May 5, 2012 at Frostburg State University. The first event, attended by roughly 150 students and families, was held Nov. 12, 2011 at Coppin State University. At these free events, students and their families hear USM students discuss their own paths to college, discuss academic majors and careers, and gain critical information about financial aid and saving for college. They also have the opportunity to speak with undergraduate admissions representatives from USM's universities.

In addition to informing groups about these larger Way2GoMaryland events, Hosten is available to meet individually with organizations throughout the state regarding essential steps for middle-school students to begin their planning for college.

Way2GoMaryland is part of USM Chancellor William E. "Brit" Kirwan's Closing the Achievement Gap Initiative launched in November 2007. National statistics show that first-generation, underrepresented, and low-income students are finding it harder to afford and complete a college degree, limiting their chances for success in the expanding global knowledge economy.

Nationally, while college-going rates rise, college attendance and completion gaps between different groups of students are expanding. Data released in 2011 and 2009 from the National Center for Education Statistics showed that African-American and Hispanic students trailed their white peers by an average of more than 20 test-score points on the National Assessment of Educational Progress math and reading assessments at 4th and 8th grades, a difference of about two grade levels.

By the year 2015, USM has pledged to cut by at least half the gaps in college-going and college- completion rates that separate low-income and underrepresented students from other young Americans. Way2GoMaryland will be part of this effort by encouraging more students, especially those in middle school, to begin preparing for college earlier. An early start on the path to college can help students: