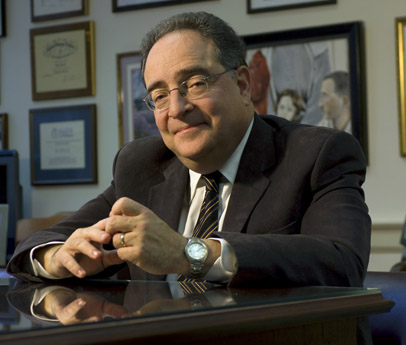 "We are extremely pleased to welcome Dr. Perman as president of the University of Maryland, Baltimore," said Chairman Kendall. "He has exhibited great leadership at the University of Kentucky, presiding over substantial growth in research funding for the medical college. His strong oversight of educational agreements for several health professional schools makes him ideally suited to lead UMB."

UMB is the state's only public academic health, law, and human services university.

"I am highly honored to be the next president of the University of Maryland, Baltimore," said Perman. "Working with its faculty, staff, students, and alumni, I relish the opportunity to lead this important institution to even greater heights. The state of Maryland and UMB were my personal and professional home for many years. To come back in this role is a special privilege.

"At the same time, I take immense pride in all that we have accomplished at the University of Kentucky, its College of Medicine, and UK HealthCare over the past six years. The University of Kentucky is a special place in a special state. I cherish the opportunity I have had to be a part of the university's distinguished history and to have been a Kentuckian during these years."

Since becoming dean at the UK College of Medicine in May 2004, Perman, 63, has overseen the recruitment of nearly 200 faculty members, a 40-percent increase in the number of science faculty and a 30-percent increase in clinical department faculty. Total all-source revenues have grown by $150 million to $500 million in the current fiscal year. Based on the most recent data, the College of Medicine rose from 35th to 28th among public medical schools in total funding from the National Institutes of Health.

Perman managed the implementation of external educational partnerships at UK supporting the colleges of dentistry, nursing, pharmacy, public health and health sciences. He was responsible for the leadership and professional management of the College of Medicine's research, educational, clinical and administrative activities, academic departments and research centers.

"I am delighted Dr. Perman has accepted the regents' appointment," said William E. Kirwan, chancellor of the University System of Maryland. "His compelling accomplishments as an educator, administrator, and fundraiser at the University of Kentucky College of Medicine position him quite well for the presidency. We have found a national leader who will advance the university's excellence as a top research university."

"I also want to express my profound gratitude and appreciation to the presidential search-and-screen committee," Kirwan added. "Under the skilled direction of Rick Berndt, a Baltimore attorney and former member of the USM Board of Regents, the committee of faculty, staff, students, and community representatives since its inception last June did a first-rate job of identifying an outstanding pool of applicants."

From 1996 to 1999, Perman was the Jessie Ball duPont Professor and Chairman in the Department of Pediatrics at Virginia Commonwealth University (VCU) Medical College of Virginia in Richmond. Before his appointment at VCU, Perman was at The Johns Hopkins University School of Medicine for 12 years, serving as professor of pediatrics and a leader of several important divisions. From 1977 to 1984, he was an assistant professor and associate professor of pediatrics at the University of California, San Francisco.

Perman received a Doctor of Medicine degree with Distinction in 1972 from Northwestern University in Chicago, Ill. Following his residency in pediatrics at Northwestern University Children's Memorial Hospital in Chicago in 1975, he completed a fellowship in pediatric gastroenterology at Harvard Medical School and at the Children's Hospital Medical Center in Boston, Mass., in 1977.

In 2008, he received the University of Kentucky President's Award for Diversity. He is a member of numerous medical societies and an elected member of the Administrative Board of the Council of Deans, Association of American Medical Colleges. He was named a Baltimore magazine Top 25 Pediatrician in 2003.

Perman succeeds UMB President David J. Ramsay, who has served in the position since 1994. "The university and the state of Maryland clearly benefitted from David's visionary leadership during the institution's impressive growth since he became president 15 years ago," Kirwan said.

Part of the University System of Maryland, UMB is the state's public academic health and law university devoted to professional and graduate education, research, patient care, and public service.  In addition to a graduate school and a 10-acre biomedical research park, the University of Maryland BioPark, UMB comprises schools of medicine, law, pharmacy, social work, nursing, and dentistry. During President Ramsay's tenure, research funding grew from $103 million in fiscal year 1994 to $517 million in fiscal year 2009.

To learn more about the University of Maryland, Baltimore, visit www.umaryland.edu.