New York, March 8, 2010 -- The TIAA-CREF Institute is pleased to announce William E. (Brit) Kirwan, Chancellor of the University System of Maryland, as winner of the 2010 TIAA-CREF Theodore M. Hesburgh Award for Leadership Excellence. This award recognizes leadership and commitment to higher education and contributions to the greater good.

Madeleine d'Ambrosio, Vice President, TIAA-CREF Institute, will present the award on March 8, 2010 at the American Council on Education's Annual Meeting in Phoenix, Arizona to Chancellor Kirwan.

"Chancellor Kirwan brings a collaborative and cooperative leadership style to higher education welcoming all viewpoints," said Stephanie Bell-Rose, Managing Director and Head of the TIAA-CREF Institute. "This coupled with his forward thinking makes him one of the nation's most dynamic and effective higher education leaders and we are so pleased to honor him today."

Established in 1993, the TIAA-CREF Hesburgh Award is named in honor of Reverend Theodore M. Hesburgh, C.S.C., President Emeritus of the University of Notre Dame, nationally renowned educator and world humanitarian. Father Hesburgh also served on the TIAA and CREF Boards of Overseers for twenty-eight years. 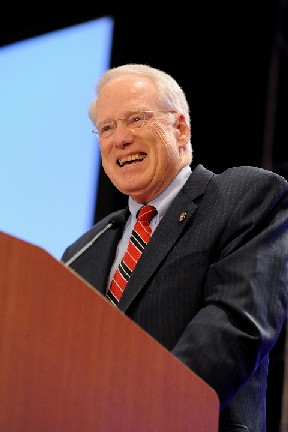 "Father Hesburgh stands as the symbol of leadership of what a university president can and should do," said Kirwan. "To have my name in any way associated with him is the greatest professional honor in my life."

Kirwan's effective leadership is most evident in the collaborative partnerships he has established between the University System of Maryland and the state's leaders. It's a partnership that has achieved excellence both within the university system and for the greater good. His efforts have produced notable results including increased state funding that has promoted enrollment growth, and supported nanotechnology and biotechnology to further enhance the system's pivotal leadership role in the knowledge economy.

Kirwan has a relentless focus on improving access and affordability in higher education and has also been a proponent of strengthening relationships between the system and community colleges, and Maryland is known as a model of collaboration between the two-and four-year sectors. With respect to controlling costs without compromising quality, Kirwan's Effectiveness and Efficiency initiative has emerged as a national model for higher education. It was launched with a systematic examination and reengineering of all the System's academic and administrative processes. While an ongoing initiative, it is already a compelling success story.

Kirwan shared, "My passion as a leader is driven by equity and excellence...equity because in a successful and stable society the benefits of higher education must be available to all, and excellence because a society advances best when people are challenged to achieve at their full potential."

"Chancellor Kirwan's visionary leadership enables students, faculty and the USM community to realize full potential for success, and his commitment is shared by TIAA-CREF as we take pride in helping to advance the goals of higher education, whether in teaching, research or service," added Bell-Rose.

About the TIAA-CREF Institute

Click here to view an information brochure about the Hesburgh Award.