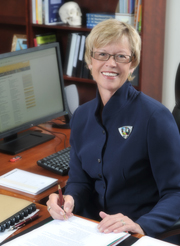 Adelphi, Md. (March 28, 2011) -- William E. Kirwan, chancellor of the University System of Maryland, has appointed Marcia G. Welsh as interim president of Towson University (TU). Welsh has served as the university's provost and vice president for academic affairs since 2009. Her appointment to the interim position is effective April 20, 2011.

The appointment of Welsh follows Towson University President Robert Caret's announcement earlier this year that he is leaving his position to lead the University of Massachusetts System. Caret's new appointment is effective July 1; he will leave the Towson presidency April 19. Welsh will serve as interim president until Caret's successor is named and joins TU later this year.

"I am very pleased that Provost Welsh has accepted this appointment," said Chancellor Kirwan. "I am confident that her experience and success as an effective higher education administrator will serve Towson University well during this transition period."

As provost and vice president for academic affairs at Towson, Welsh is responsible for all academic, curricular, and faculty affairs. Prior to joining Towson in 2009, she served for seven years as senior vice president for academic affairs and provost at Adelphi University in New York. Earlier in her career, she was associate provost and dean of the graduate school at the University of South Carolina.

"I am honored to be selected as interim president of Towson," said Welsh. "I have come to love the Towson community and take pride in the remarkable growth of this institution. During this transition period I will work to continue the forward momentum Towson has attained in recent years."

Chancellor Kirwan in February appointed the search and screening committee for the new president of Towson. Chaired by USM Regent Louise Michaux Gonzalez of the Hylton and Gonzales Law Firm, the committee members have already begun their work, which will conclude with the recommendation of finalists for consideration by the chancellor and the USM Board of Regents. The board will make the final appointment.