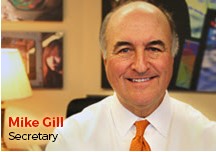 Secretary Mike Gill is a business leader with four decades of experience as an entrepreneur, technology executive, investment banker, and public servant. He was tapped by Governor Larry Hogan in 2014 to lead the Maryland Department of Commerce as its first-ever Secretary and was asked by the Governor to again lead the Department in December 2021.

Mike led the transition to Maryland Commerce in October 2015 and spearheaded a major cultural shift in the way the department interacted with its partners, stakeholders and customers. Under Mike’s leadership, Commerce created an aggressive customer outreach effort, expanded its business development team, and increased emphasis on Maryland’s growth industries, including life sciences, cybersecurity, advanced manufacturing, as well as higher education. Mike chairs the Commerce Subcabinet, which is made up of seven state agencies that connect regularly with the business community and sits on the board of the Maryland Public-Private Partnership (P3) Marketing Corporation, which was created to help drive the state’s branding and marketing efforts.

Mike began his career in 1974 at IBM, where he served as an account manager, regional specialist, and sales school instructor for the company’s Office Products and General Systems Division. He left IBM to join Ernst & Young as a Regional Director of Data Systems. In 1984, Mike founded AMERICOM, a wireless communications company that grew to more than 1,200 team members before it was acquired by Solectron in 2000. Mike also co-founded First Page USA Inc., which was later acquired by Metrocall. He was also a key member of the team that acquired leading regional power generator firm Curtis Engine.

Mike most recently served as chairman and principal of Evergreen Advisors, a Mid-Atlantic middle market investment bank that has completed over 100 M&A and capital raising transactions, totaling over $5 billion in value for publicly traded and privately held companies. He is also Chairman of the Board of Directors of St. Joseph’s Medical Center (part of University of Maryland Medical System).

Mike was chairman of the Towson University Board of Visitors, a member and former chair of the audit committee for the University System of Maryland Board of Regents, and a member of the Clemson University President’s Advisory Board. Mike has twice been recognized as a “Most Influential Marylander” by The Daily Record, and he also is a past recipient of the Baltimore County “Good Scout” award. In 2021, he was named to the Baltimore Sun’s Business and Civic Hall of Fame.

Mike and his wife of 47 years, Mary, have three grown children and eight grandchildren. During his free time, Mike enjoys golfing, reading, exercising, and spending time with his family.